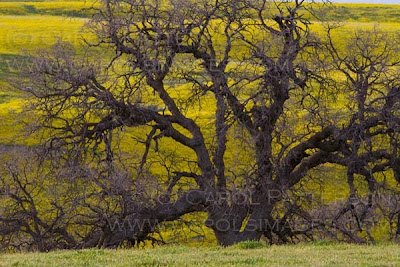 Sunday I took a drive that led me through the green hills of Gorman dropping down to the fantastic violet fields of Kern county. For miles, the flat fields were an incredible vista of lupine.
I took the Hwy 166 exit toward my side of the California Coast heading toward my first stop of the day, Wind Wolves Preserve. I was there the same weekend last year at the end of the peak bloom, this year I think the peak has yet to come. I packed up my gear and headed up the trail, it was a fun morning of shooting and a good test to make it up the trail to the top of the back country trail head, and a much easier walk back down the bike road two miles to the parking lot.
I found several things to shoot, but also a lot of grasses and a few flowers missing that I had hoped to find.
Mid afternoon I headed down the road, stopping for a quick look at the Carrizo Plains, I think this will a much better year there than last, although still early.
I was in a hurry to my last stop of Cottonwood Canyon and hoping to get there with some daylight left. The rocky river bed was green with just a few flowers showing, I am hoping that a week or two will bring a better bloom of flowers, but this may just be the year of grass. As I was leaving, I saw the last light on the hill be hind the oak tree above. The golden hill was a delight and not mustard! I stayed as the sun dropped in to the coastal fog and headed home.
Next trip!
Posted by Carol Patterson at 6:52 PM 2 comments:

Fog Snow and January in the Sierras 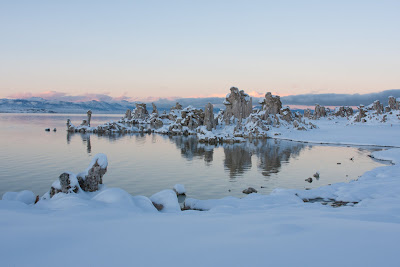 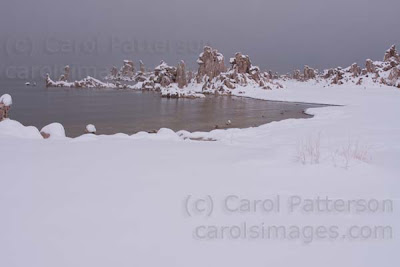 In January I was able to get away for a weekend. We drove up Hwy 395 to get to Mono Lake for Sunset.
A storm had rolled through and the roads were still covered in snow. Even though the sun was out, the snow plows had not made it down to the parking lot at Mono Lake.
As our group was debating taking the road down and plowing our own trail, a Ranger came by, we convinced him that maybe he should check the parking lot out and that we would follow him down should he get stuck in the fresh powder. It was a good thing for him that we did, turns out he had "girly man" tires on that State 4x4. After we dug and pulled him out and followed him back up to the main road we returned for a few pictures, with another friend that had the same thoughts for the weekend, only no 4x4.
We enjoyed the sunset and headed back to our hotel and to dinner. There we ran in to some one else that had hiked to the lake. He was still tired from the almost two feet of power and the mile or so walk. We made our plans to return in the morning for sunrise. 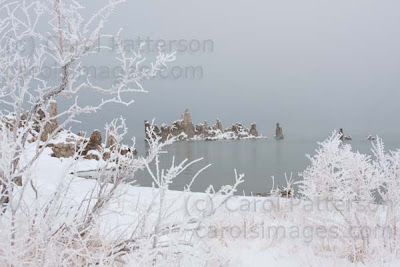 We woke up to a thick lid of fog over the lake, we hoped it would lift for sunrise, but a little fog was not going to stop us.
Instead the thick fog was incredible, we had an 18% grey sky. Details in the Tufas and ice crystals on the rabbit brush. And fresh rabbit trails to shoot in the virgin snow. It was magical and only our small group was there to enjoy the soft light. 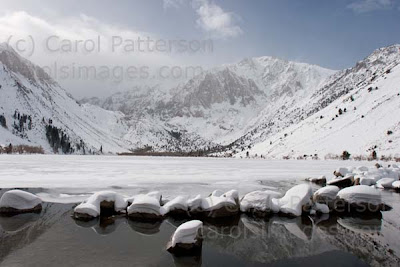 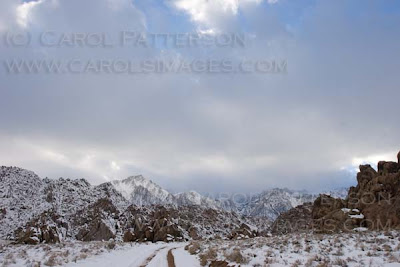 Since we had to get back to the real world we headed back down the road.
We stopped at Convict Lake, wow, what incredible sight! I think my favorite shot of the weekend.
We made it to Lone Pine and the Alabama Hills before sunset. While it was not a colorful sunset, it was still a treasure to watch.
We tossed a coin, stay and see what dawn brought or head home.
Home won. But it was a very special weekend of snow and the Eastern Sierras
Posted by Carol Patterson at 7:40 PM 1 comment: