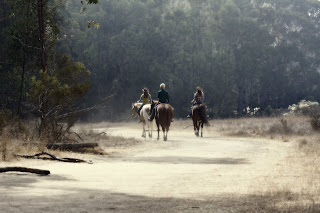 Sunday, 10-26-08, was taking photos for a website for a new equestrian center. I woke up by 8am to check on the fog, I could not see across the street. This was not looking nearly as promising as I had hoped. Sunny day, the woods, the butterflies, the beach....instead white out.

By the time we got to the parking lot of the location, the fog was lifting, things were looking up. We would just have to deal with the weather. The fog added to the trail images, so I added a bit more to the fog. 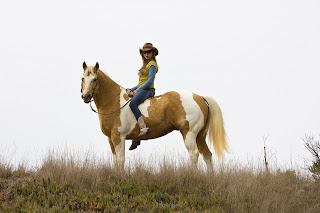 The white sky made for some good high key images and to make the horses and riders more of the subject than the location.

The light was fairly even on the horses and riders, but on this section of the California Coast the sun is over the water. This means shooting into the hazy bright white sky if you want the horses running past in the water. Not the best way to see the beach, but then again, it was so foggy you could hardly see the horizon line splitting the ocean and the sky. 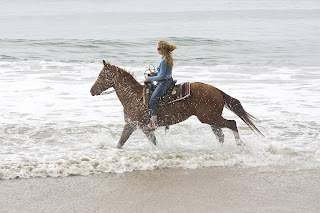 All things considered, this was a really fun shoot, with lots of images for the website and a good Sunday Hike!
More Photos Here
Posted by Carol Patterson at 5:58 PM 1 comment:

On Saturday night, 10-28-08, I went to Ventura to watch the Kittle Motorsports Team race their wingless 410 USAC/CRA Sprint Car. 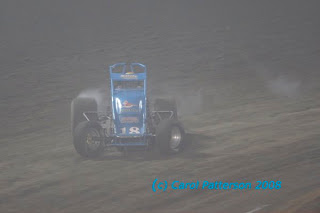 Ventura is about 45 minutes south of me, about half way there I noticed the fog bank rolling in. I knew it was going to be a cold night at the track. Ventura's Seaside Park Fairgrounds is located right at the beach, it is usually cool there, but tonight dust was not going to be an issue....now to see the cars on the track.

As I sat in the stands, with my sweatshirt hood up, gloves and ski jacket on, I was wishing I remembered that blanket out of the back end of the car too.

The fog was hitting the stadium 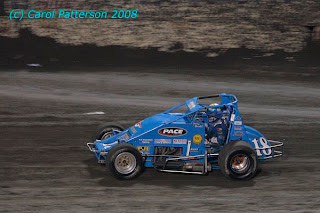 lights and falling like rain. The top of my camera bag was wet. I only used the one camera, Canon 40d, since it is more weather "proof" than the Canon 20d I also had, besides, it was too cold to be taking off my gloves to open the camera bag.

Danny "Showtime" Sheridan won his heat race and a little bit later the fog lifted enough to see the track.

Danny did a good job avoiding the traffic, even dodging a few wrong way drivers, but in the end it was not his night to win the race.

I am going to miss the biggest Race of the Season, the three day Oval Nationals that start on Thursday down in Perris (not not Paris) at the Perris Auto Speedway. 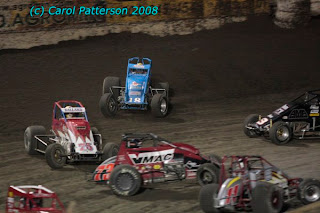 
More racing photos can be seen here.
Posted by Carol Patterson at 10:11 PM No comments: 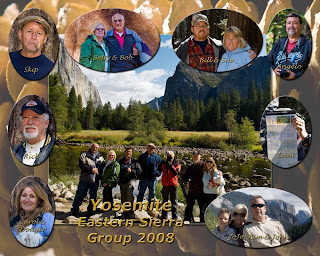 On Monday, 10-13-08, Glacier Pass Road re-opened and we went up to the Mariposa Grove of Giant Sequoias You really have to be there to get the actual size of these trees. Photos really do not show how big they are actually. There were Wood Peckers and Blue Jays in the trees and squirrels running on the ground. And lots of big pine cones just waiting to add a big dent to you car.

After the Redwoods, we stopped at the Wawona Hotel. It is very cute and has a variety of rooms, from ones with a shared bath for just a bit more than a cabin in Curry Village to private rooms with bathrooms. For the first time on the trip, we all took off our winter coats and could just wear t-shirts! We had cheese and crackers there, sorry about the Danish Blue Cheese in your cooler Leon.

We stopped next door at the Pioneer Center. I had never been there before, it was very interesting with buildings from the old homestead days moved to this location. There is even a horse drawn wagon for guest rides. We took the drive up Glacier Point road and looked down 4000 feet to our campground below, we also put our jackets back on! The air was thin and we were tired, we headed back to Tunnel View to watch the Moon Rise. It was a nice end to a great trip with a bunch of great people!

"The best-laid plans of mice and men..."

When your planning a trip almost a year in advance, you have to go by what the weather and in this case fall colors have usually been. We fully expected COLD in the Eastern Sierra's and had planned on it, well at least Leon had his fleece britches along. We had a back up plan in case it was windy, but it was windy more than we had back up plans for.

We were looking forward to thawing out in Yosemite, after all other than Saturday, the weather report called for mid 80's in the day and mid 40's at night.

On Friday 10-10-08, we got up to drive over Hwy 120 Tioga Pass, the wind was howling and windshield wiper fluid was frozen in my car. But it was fairly clear and we were happy to be crossing this pass before the rain/snow.

The pass was pretty, but we really should have stopped on the way over on Tuesday 10-7-08 when it was warm and still. Instead was COLD and windy, there was even ice on the still part of the Tuolumne River. We did not have the road work delays that we had on Tuesday, so it was a quicker drive. 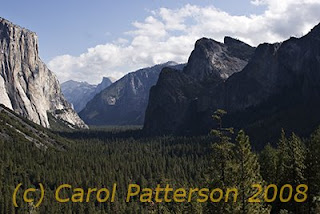 We stopped at the Tunnel View to take in Yosemite in its grandeur and then headed to our hotels and campgrounds to get settled in for the day.

Kim and family had just stopped by, their reservations in Curry Village had been cancelled because of a rock slide, we had just finished checking details with Curry and were walking back to the campground when...SNOW. Small flakes started flying, JoJo really enjoyed them and they melted right away. It was a treat to see, but not what we had expected. We are lucky to have crossed Tioga Pass early in the day, the road ended up being closed for the next few days!


Kim got some fun shots of the surprise snow fall and JoJo. We had another fall flurry the next day as well.


My worries about us over heating in Yosemite were gone, instead we were more worried about how we were going to stay warm. I think if we added up 2 days of temps, we might have equalled what the weather forecast suggested.


Next post: Wawona and the Mariposa Grove Links go to more photos at my photosite www.carolsimages.com
Posted by Carol Patterson at 10:11 AM No comments:

On Tuesday October 7th a few of us met in Lee Vining, CA for a photo tour of the area. We were hoping to find autumn colors, warm days and no breeze. Instead we found that the area can have some extreme weather. 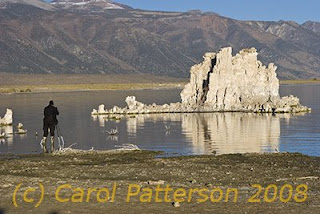 On Wednesday, 10-8-08, the day started out calm and cool. We visited Mono Lake for "sunrise", I was a bit late, but that was okay because the Nikonian's had pretty well found all the best tripod holes. They came well prepared with muck boots, trash bags for their tripod legs and 3 large vans full of photographers.
After Mono Lake, we drove back to the June Lake Loop campground, Oh! Ridge, for some of Leon's fine Bishop Bakery Cinnamon rolls and hot coffee. We spent the rest of the morning in the June Lake area. There was little color other than green and the wind started to pick up. But we kept ourselves occupied with what we found.
We went only as far south as Mammoth Mountain and the Devil's Postpile National Monument We had expected to see some of the media there covering the Steve Fossett plane crash discovery in that area, but found the park was pretty empty.
That night the winds really picked up, we had planned to spend the next day exploring Bodie State Historical Park so the wind was more of an inconvenience than a stopper to a day of photography. The park was full of photographers too.
We stopped at Lundy Canyon on the way back to Lee Vining to look for more autumn colors, we were lucky and found some, but with the wind it made them better to enjoy in person than photograph.
By Friday 10-10-08, the winds at Oh! Ridge had me wondering how anything stood up and the cold had the windshield wiper fluid frozen solid in my car. We left and took Tioga Pass just before the weather got really bad.
Photos of the trip are here: Eastern Sierra Fall Color, Mono Lake, Devil's Postpile and Bodie.
Next, the road to Yosemite
Posted by Carol Patterson at 2:55 PM 1 comment:

Due to the nature of my life, my postings will be randomly timed, usually after my latest photography adventure.
Posted by Carol Patterson at 9:33 AM 1 comment: