Wildflower season in California is ruled by the weather. Plans for this weekend included a trip to Sutter Creek to see the daffodils. It did not include the winter storm with the rains, wind and low snow level, oh well.

Since I was still hoping for wildflowers this weekend, I thought I could beat the storms arrival if I stayed closer to home. I set the alarm for early, just to be wake up earlier with the sound of rain. I sat in bed watching the weather channel hoping for some guidance on where the storm was, just to see we had no rain...hmmmm I decided that since it was calm outside and I had the camera gear packed I may as well go.

It drizzled and rained for the drive to Santa Maria and the start of Hwy 166. I thought well at least I beat the wind. I went later in the season last year and the hills showed more color so I was not expecting much when I got to Cottonwood Canyon, my first stop. The hills were still green rather than the almost neon yellow from last year, the river ford was dry and the showy river bed was mostly yellow. And it was cold, gray and the wind was picking up. 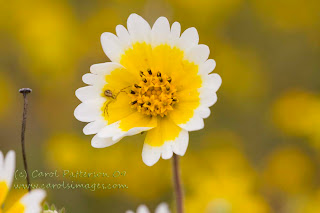 The Tidy Tips against the Goldfields would just have to do. There were some tiny Lupines and Blue Dicks waving in the wind with the Fiddle Necks.

I did find some flowers to shoot, but spent most of the time chatting with Lynne Glazer who was there to shoot a horse event crossing through the flower trail.

The wind blew away the clouds, but since I was done shooting Tidy Tips, I headed on down the road to my next stop. 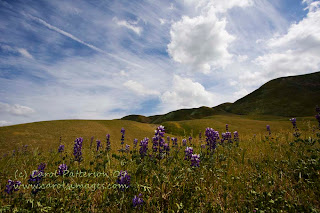 I have never been there, but had read that it was very nice on my favorite wildflower location tip website, Carol Leigh, I was unable to do a lot of hiking, but guessing there was much more to be seen up the river trail. The hillsides already looked past their peak, but the snow on the mountains behind make me think plants by the creek will still be blooming.

One of the reasons I like exploring Hwy 166 is that it is the back side of my local mountains. Last weekend I looked at that same snowy peak from Mt Figueroa and in Cottonwood is likely from the Mt Figueroa water shed.

I would like to go back and spend more time, with less wind, at Wind Wolves. 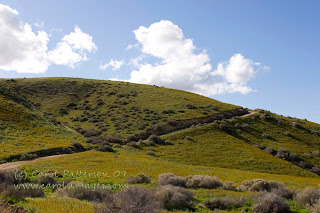 I headed back toward home on Hwy 166, but pulled off just past Maricopa on the Elkhorn Grade Road. I had read reports on this route but never taken it. Since shooting macros was out due to the wind, but the clouds were nice I figured I would still be interesting.

The road is about one dozer/grader blade wide and a lot closer to off roading than I had hoped for, but I also knew it went back to Soda Lake Road right down the middle of Carrizo Plains Reserve so I did it anyway. There were plenty of nice views, but next time I will do it with a second car along for that "Just in Case". From most of the peaks I did have cell service, but did not think AAA would like to help me change a tire.....

I headed back to Soda Lake Road and down the middle of the Plains. It was pretty, but mostly yellows and dry. The wind was howling and the sun was getting low, so I did not stop a lot. 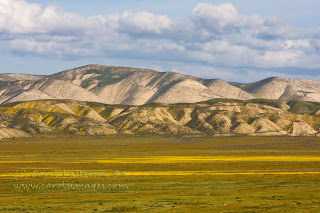 Hwy 58 was full of Baby Blue Eyes last year, but so far I only found one little patch on the side of the road and just a few Shooting Stars.

As I got closer to the coast, the drizzle started back up and the wind calmed down.

It was a fun day, but next time I will try to get to Wind Wolves before the wind!

Posted by Carol Patterson at 1:43 PM