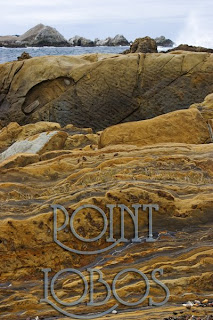 Sunday morning brought the rain that had been promised for days. Just enough to make you cover your camera and not enough to clean the road sand use on the snowy Yosemite roads off the cars.

Point Lobos State Reserve is a special place on the Monterey coast and it had been years since I had stopped for a visit. The wind was howling and the sky a deep gray, the storm was on its way, we could only hope that it would wait long enough to get some nice shots. It is kind of like visiting an old friend, you remember the rocks you really want to see wet from the rain and the walk to the point in the cypress trees.

With the window howling, tripods stayed in the car, more likely to blow over since staying low and behind rocks seemed the only break from the wind. But a good storm just seems fitting for the park and I could always hope for a break in the sky. The wind blows white caps on the ocean and makes the water even 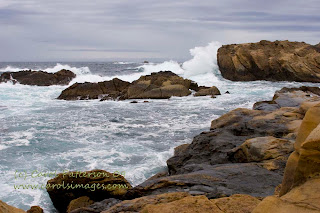 rougher looking. The storm drove the waves up the rocks, the images lack scale, but there was not putting a person in danger just for scale!

While walking through the Cypress grove the rain band passed, the deer came to pick their favorite blades of grass and a few Star Lilies called me to come and shoot them, of course as they blew back and forth in the wind.

With out knowing how much longer the rain would last, we headed down the coast and toward the end of a nice calm before the work storm that was waiting for me at home. 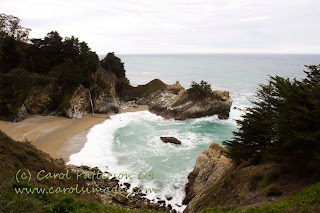 There was time to stop at Julia Pfeiffer Burns / McWay Falls it was still raining a bit and the wind blowing, but I was determined this time I would get a couple of better shots than the last time. It was raining less and the wind was not blowing me off the overlook like last time, but there was still too much rain in the air to make for a good shooting day.

To view a gallery with more photos, click the top Point Lobos photo.
Posted by Carol Patterson at 11:25 PM