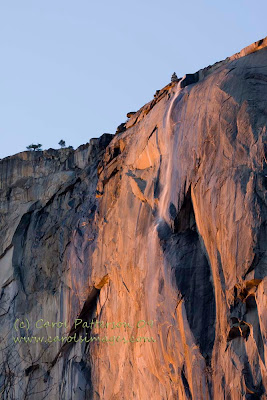 Firefalls in Yosemite used to refer to the Curry Village 9pm event when a load of burning firewood was pushed from Glacier Point for the enjoyment of the crowd below. Today, Firefalls is a natural event that happens for 10 to 14 days toward the end of February. The setting sun lights up a small section of the rock wall and the Horse Tail Falls looks like it is on fire.....when you get it JUST right-I did not get it just right.....
For years Firefalls has been more of an insider secret, but it was featured in Outdoor Photographer, written about and now on the DNC hotel reservation website There were also numerous $$$ workshops offered in the park for the weekend. Since the rooms were sold out and the prospect of fighting over tripod holes was not appealing, our group decided shooting the Firefalls mid-week was a good plan. Our friend Charlie Phillips has a favorite shot of mine and showed our group the best places to shoot it from.
There are many variables, if it is cloudy nothing to light up with or if it is a dry year, no falls. The first night our group got to the favorite parking lot very early and stood around and waited. It was looking like maybe we would get to see it, but the snow that brought the water for the falls, also got the fog to raise and a thin layer of clouds between us and the sun softened the light to the point there was no Fire in the falls.
The next night, Thursday, we headed back to the parking lot...... just to find it was already packed full with a few people that did not understand what the diagonal lines were for in the parking lot (one car in 3 spaces... 2x), a workshop of 20 people all with the same lenses, cameras and angles talking about the various compositions....(hmmm can we say the same) and the people that found this big open spot to set up their tripod and did not notice it was the exit driveway from the parking lot and did not think they might want to move to allow the cars out of the parking lot. The main road in the park had just been reopened to allow limited access to the parking lot, the lane coming out of the parking lot was already full of people parking and hoping the rangers would not show up. We joined them and left a gap for our group and a few other people to shoot from.
As we discovered, the angle was not the best..... But we were not run down or part of the insanity of $$$ workshops and camera clubs jockeying for the best spot. We did get some good giggles about the people that pulled up late, discovered the people parking on the street, the cars shoved in the snow next to the parking lot and still thought "hey if I drive in the wrong way I am sure to find a parking spot..." Thankfully, no one backed in to us. The wind blew the falls around, the light was fairly soft, and we had too broad of an angle....but next time.
Besides, we only paid the $89 Bed and Breakfast midweek rate for the Lodge, ate til we were stuffed in the morning. Shot all the rest of the day, enjoyed the good company of friends and still got an idea of what we want to see next time in Firefalls.
If you click HERE, it should be a short animated clip (unplanned so a bit jerky) of what the firefalls looked like from the street.
Posted by Carol Patterson at 12:20 PM