One of my friends, Kim, found that the Sandhill Cranes we have been wanting to see were at a Fish and Game Dept refuge just 45 minutes north of her in Bakersfield. So we had to take a trip there since it was so much closer than the other places we had scouted out. http://www.fws.gov/refuges/profiles/index.cfm?id=81612 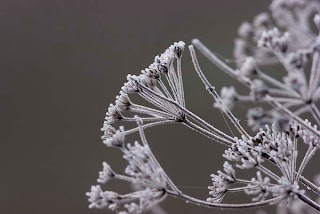 Of course, we had to be there for sunrise over the reserve. Two of us had to leave our homes by 3:30 am to meet and carpool to Bakersfield. I had checked the weather forecast the night before and found that there was a fog warning, but in this part of central California, fog warnings are common and the CHP reports said the roads were clear. As we came over the pass, we were happy to see the lack of fog....and then we hit the fog and it got thicker and thicker. The reserve was down a small farm road, we could hardly see the fields next to the road for the fog.
Once we got to the reserve we could hear the birds, sounds all around us, but we could not see them. It was 31 degrees, cold damp and frosty, we stood around the parking lot a bit debating the fog, but since we had come so far, we had to gear up and head down the trail. 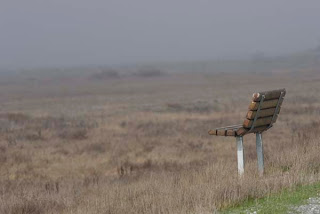 Most of the refuge is off limits so the birds can nest in peace but the road in was an easy walk. We arrived at the view platform, we knew we were surrounded by birds, we could hear there calls and in the breaks in the fog overhead, catch a glimpse of them flying over head. But that was it. We found a few other things to shoot and decided what all good nature photographers in this situation would do is, go for breakfast and hope it clears up. So off to the Black Bear Cafe in Tulare we went.

By the time we got back, the fog had lifted some in most areas but since there is water at the refuge, the fog was still pretty thick. We walked back out to the viewing area and with our longest lenses and telecoverters, we could see birds. We hoped that some where the cranes, they were so far away and hazy it was hard to tell. 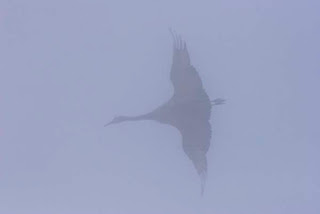 We did see:
Sandhill Cranes
Hawks
Canada Geese
Ducks
Swans
Meadow birds
and an eagle
One thing I learned, when calling for information, ask how far from the viewing areas are the birds. I would guess with strong binoculars, it is a fantastic birding location, for photographers with out the big buck lenses......it is a great experience.
Oh, and we did find the Sandhill Cranes, they were in the farmers field we drove past 3 times but it was too foggy to seem them. And they are very nervous critters to try and sneak up on. even in a hybrid quiet car!
More photos here: http://www.carolsimages.com/gallery/7078184_aHXn5#453648008_uVJgh
Posted by Carol Patterson at 8:16 AM